There was a vulnerability disclosed by SEC Consult earlier today that affects a significant number of SOHO routers. NetUSB is a technology that provides a "USB over IP" functionality. It was developed by a company KCodes and since then has been adopted by many popular network device manufactures (including Netgear and TP-Link).

NetUSB runs as a Linux kernel driver. When it is available it launches a server on TCP port 20005 (that is typically accessible on the LAN only). I have seen some reports already claiming that some (mis)configurations were exposing port 20005 on the WAN side (i.e. to the Internet) as well. And this is bad news because according to the advisory NetUSB suffers from a remote stack buffer overflow. And being kernel driver it means that remote attacker by exploiting this vulnerability can gain admin privileges on the affected device.

The AES keys are static - that's not great, as it means they are useless. They won't be able to stop the attackers as the keys are already known to them. And all they need to do is to send a computer name longer than 64 bytes to cause an overflow. This feels like 90s again.

If port 20005 is not accessible from the outside then this reduces the risk but it still leaves this network vulnerable to the attacks from the inside.

I've got my hands on one of the affected models - TP-Link Archer D9.

reveals that it does indeed listen on port 20005 in the default configuration (i.e. I was able to connect).

A web management interface has this section under USB Management -> Print server: 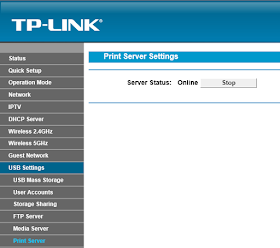 As you can see by default the Print Server is turned on.

I am not sure if this approach fully mitigates this issue but it certainly makes the overall situation better.
An updated firmware version with a fix from TP-Link is expected around the 25th of May. Until then I would recommend you to stop the Print Server.