I needed to run a couple of non-trivial commands from the command line recently. And this brought back some memories when I had opportunities to be more hands-on. Like any industry, IT has its own tricks of trade. As we got accustomed to GUI (more on the Windows side than *nix) the art of using command line was getting less relevant and less utilised. Having said that, if you manage larger environments than automation is a must and executing scripts and various commands at scale becomes a necessary skill. In this blog post I decided to share a few interesting and useful commands that I've learnt over the years managing Windows environments. The Internet is full of "Top X cool commands every administrator should know" articles containing some fairly basic recommendations. There is no need to repeat this. I would like to share a few less trivial commands that might make it easier for you to perform certain tasks.

The key=clear parameter gives us an ability to extract a WiFi password from any WiFi network (profile) stored on your computer.

Extract a list of Domain Admin users in the organisation

By default the "Authenticated Users" group has Read access - any authenticated user in the organisation can execute this command to identify which users belong to which group. In the example about I used the Domains Admins group. This type of information is useful for the attackers - it gives them the "juicy targets" - which users to target (phishing, brute forcing etc) to get the domain admin privileges.

Get a list of all users in the domain


Gives you a long list of all user accounts in the domains. Again, might be useful for the attackers - gives them another piece of a puzzle.

This can be done in multiple different ways. Here I wanted to demonstrate the "piping" trick, where a vertical pipe character is used to combine 2 commands. And the trick is that the (standard) output of the first command is used ("piped into") by the second command. In our case the "ipconfig" command displays a lot of information but we use the "find" command to only display lines containing the "IPv4" - this gives us an IP v4 address of the computer. 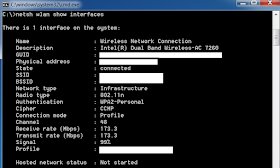 netsh is a VERY powerful and useful command. Here we are using it to display information about all existing wireless network interfaces on our computer. This information is very handy when troubleshooting various network related issues.

We can also extract information about the wired interfaces - just replace "wlan" with "lan" in the command: netsh lan show interfaces

It's great when commands like the one above dump a lot of useful information. But sometimes you just need this one piece - especially if you are running a batch file and want to identify a specific value. The previous example shows lots of different things including the SSID (wireless network name). If we just need to extract the SSID we can pipe the output into the "findstr" command. I decided to use "findstr" instead of a simpler "find" because it supports regular expressions. The first command displays both SSID and BSSID and I wanted to remove BSSID from the final result.

Get a MAC address

The netsh command that we used above to show interfaces' info can also be used to get the MAC addresses for each interface (disguised as a "Physical Address" in the output). But there is also a simpler command to do this:


It will display MAC addresses of all network interfaces that are present in the system.

The "systeminfo" command contains tons of useful operating system configuration details. Run it without specifying any parameters first to see the variety of data it can provide you. Sometimes it might be beneficial to store all of that information in a file (e.g. to be imported into the centralised repository later on). For that purpose I would recommend changing the output to the CSV format. This will make import much easier:

Environment variables have been around since the MS DOS days. Just run the SET command to display them all in the console window. Each environment variable can be referenced by its name surrounded by the percent symbols.

See how each variable can be referenced in any other command:

My only advice is try using environment variables everywhere you can instead of hard-coding certain values in your scripts.

This is probably one of a less known commands. If you have never seen a report produced by this command - give it a go a see what kind of information it can give you. It is incredibly useful for troubleshooting any power, sleep, hibernation related issues.

As simple as that. It will bring a virtual keyboard on the screen - just in case you want to type with your mouse ;)

Bring up a User Accounts dialog

Without the "/all" switch whomai just returns the current logged in user name. With the addition of the "/all" switch you can see a lot more useful information including all groups this account is the member of (including UUIDs) and all privileges assigned to this account (things like SeIncreaseQuotaPrivilege, SeSystemtimePrivilege etc)

Now let's explore the power of WMI. WMI is an incredibly powerful way of interrogating various system parameters. I want to share a few useful examples with you just to demonstrate what's possible. We will use the wmic utility that comes standard on every version of Windows that was released after Windows XP.

We will extract this information from the win32_baseboard WMI class. To make it more interesting I will add a few additional command line techniques that you might find useful:

Here we are extracting the 9th token (tokens in our case are space separated), which happens to be the motherboard manufacturer. Note: If a value contains spaces then they are treated as separate tokens by this method.


Using the FOR command to split a string into tokens is a generic way of handling strings from the command line.


I also wanted to demo the "more +n" trick. "more +1" means "skip the 1st line". The output consists of 2 rows - the table header and the row containing the actual values. We need this to skip the 1st (header) line in the output.

There is a more elegant way to extract values in wmic. And I will demonstrate it in the next example.

This gives us total physical memory installed in our system in bytes (we have 16GB in the example above).

We can also get max memory capacity (commit charge)

We see that we have roughly 32GB of RAM available - this includes the 16GB of physical RAM plus the size of the swap file.


Get version of the Adobe Acrobat Reader installed on your computer

I hope you were able found a couple of useful commands. What are your favourite commands? Please share them in the comments section below.